Ingenzi Knit Union
On January 5th, RAPP representatives visited the Ingenzi Knit Union (IKU) at Village of Hope. The IKU is a cooperative union that currently consists of three Rwanda Knits-supported primary cooperatives. The three primary cooperatives are Mpore Mama, Hope, and Hosiana. Each cooperative aims to provide income generating activity through knitting to low-income and marginalized people, primarily women. By joining together into a union, the cooperatives have been able to increase production capacity and profits. As a union, the cooperatives are now able to handle larger orders from both local and international buyers.
During this visit the executive board of IKU was meeting with a representative from Indego Africa, an NGO that connects local artisans with international markets. IKU and Indego are in the process of building a partnership. The main purpose of this meeting was for Indego to get to know the union’s organization and business practices and to explain the benefits and expectations of a partnership.  As a partner, Indego will help to provide and facilitate a curriculum of trainings and classes to cooperative members. These educational activities will help the cooperative members to increase productivity and their ability to run their business efficiently.  The IKU members are excited for these trainings because they would like to be a completely self-sufficient business. Additional meetings have been scheduled to work through the details of the partnership.
Susuruka
On January 11, representatives of RAPP and the Ingenzi Knit Union (IKU) visited the Susuruka knitting cooperative in Nyamata. This cooperative has requested to join IKU. If Susuruka integrates into IKU, it will be the fourth primary cooperative. IKU hopes to increase to a total of six primary cooperatives by the end of 2011.
Today the Susuruka members were meeting with three members of the IKU executive board to discuss joining the union. First the president of IKU explained more about the union and its current primary cooperatives, as well as what requirements must be met to join the union. Then the leader of Susuruka gave some background information about the cooperative. The cooperative currently has 27 members, 37 machines that can be used for international orders, and 20 machines that can be used for local orders. Susuruka is partly supported by the Millennium Villages Project and works directly with its Business Development Office.
In order for integration to occur, IKU must vote on the matter at their General Assembly meeting on January 14th. If they vote to accept Susuruka as a primary cooperative, IKU will write an official letter of integration and Susuruka will pay the first installment of their capital share. Once these steps have been completed, Susuruka will become a full working member of the union. As of now, Susuruka appears to be a good fit in the union because they have helped with some of IKU’s larger projects in the past and are very skilled and dedicated workers.
Posted by Rwandans Allied for Peace and Progress at 12:04 PM No comments:

Amajwi Y’ubuzima  Co – Op Project
RAPP funds a variety of cooperatives to generate income for vulnerable people, primarily those living with HIV.  They provide these co-ops with supplies, goats (number based on membership), and seed money for their idea, with the hope they may one day become self-sufficient.  Once the cooperative has proved strong enough, RAPP initiates discussions with district officials to advocate for permanent land ownership.  Site visits were made yesterday January 10th in Nyamata in order to assess the progress of two of RAPP’s sponsored co-ops.
Imbaraga Z’urukundo [kopizu]
This cooperative, consisting of 100 members, has decided to grow pineapple on land that has been rented for a period of three years.  RAPP has assisted this co-op in applying for a grant for equipment and seeds to start their pineapple plantation.  They are also helping the co-op come up with solutions to problems, such as where to store water so that their pineapple crop produces a harvest that can help them become self-sufficient in three years.
The first harvest has not yielded as much pineapple as hoped, but it is expected that the second harvest will be more successful.  This co-op’s biggest problem is that pineapple takes over a year to harvest and in the mean time they must find alternative income.  They have begun to seek alternative income through buying and re-selling foodstuffs at local markets in order to supplement their incomes.
Kotwika Cooperative
This cooperative began as an association in 1999 and became a co-op in April 2010 with the assistance of RAPP.  The co-op consists of 72 members, many of whom are HIV positive.  They have split their land into two sections, one which is on its first harvest of pineapple and the second which is on its third.  Due to their experience growing pineapple, they have skillfully maintained their land, despite the over-abundance of sun, and have therefore produced a good harvest.  After the third harvest of pineapple, they plan to cultivate maize as a way to replenish the land.
One of their main challenges is having enough man power to work the field when members of the cooperative get sick.  They often are forced to hire outside help which cuts down on their profits.  Other challenges include finding a large buyer for their pineapple supply and building enough equity to receive government loans.  RAPP is assisting in this endeavor by training members and establishing a link between co-op members and the national bank.
Community Theater Troupe (Nyamata)
Our third visit of the day was to the Community Theater Troupe (CTT) based in Nyamata.  The CTT has two members that are HIV positive.  The seven members of this talented group perform plays to spread the message of HIV prevention, family planning, and sexual health.  Right now they are preparing for their presentations in the local markets scheduled to start at the end of January.  They rely heavily on music and dance to spread their messages.  RAPP will provide funding for six months for start-up costs and foodstuffs to sell at the market performances.  The goal at the market is to spread a message while being profitable in selling foodstuffs simultaneously.  The main market only takes place twice a week, so the CTT may also rent a house so they can do business during the other days as well. The main challenge they face is to make sure they can generate enough income to cover operating costs, salaries, transportation, and theater equipment.  They are hoping that the activities at the market will generate enough income to solve this problem.  Two long-term goals are to increase the number of performers and spread the message to radio and television.
Posted by Rwandans Allied for Peace and Progress at 12:02 PM No comments:

Welcome to the new website of Rwandans Allied for Peace and Prosperity (RAPP)!  RAPP creates awareness among young people about Sexual and Reproductive Health Rights, HIV/AIDS and how to prevent it using theater and other unique forms of message transportation.  RAPP also reduces stigma by using its purchasing power to initiate and/or support businesses and income generating activities run by local self-help groups.  Our site is under construction, but we invite you to explore it and become involved.  Contact us for more information on RAPP. 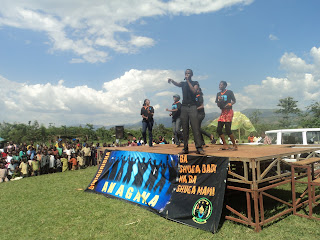 Posted by Rwandans Allied for Peace and Progress at 4:12 PM No comments:

Rwandans Allied for Peace and Progress
RAPP is a Rwanda-based NGO (non-governmental organization) which focuses on income generating, HIV Prevention, and Anti-Discrimination programs.